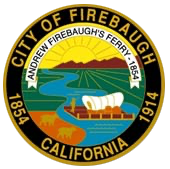 Andrew Firebaugh was born in Virginia in 1823. He served with the Texas Mounted Riflemen in the Mexican War. Coming to California in 1849, he fought in the Mariposa Indian War under Major James D. Salvage on the expedition that discovered Yosemite. In 1854, he established a trading post and ferry on the San Joaquin River. Known as Firebaugh’s Ferry, it was a station on the great Butterfield Overland Stage Route. He built the first road over Pacheco Pass. In 1872, he was one of the the founders of the “The Academy”, Fresno County’s first secondary school. When he died in 1875, he was buried on his homestead some ten miles above there on the Tollhouse Road.

Completed around 1885, this jail is one of only two Lincoln-log style jails still in existence in California. This unique type of construction has no frame and uses square nails and wood plank floors. The jail has two cells inside.

In its day, it housed “banditos” along with Firebaugh’s more disorderly citizens. It also housed a fierce, gun toting woman who lived in the building with her goats.

On one occasion, a prisoner broke free after friends hitched a team of horses to the window bars and yanked them out.

The partially restored jail had been placed at various locations throughout Firebaugh before being moved to its final resting place at the Firebaugh Rodeo Grounds, which is east of its original site on the northwest corner of P and 13th Street.